Join us for this free concert at Hailsham Parish Church at which we will welcome the town’s mayor. The concert will include performances by Hailsham Choral Society, Bourne to Sing with the Warbleton Warblers and trumpeter, Marcus Plant.

Hailsham Choral are very pleased to have the opportunity to sing together again at the Mayor’s concert, with our new MD, Rosie Howarth and our new accompanist, Will Hancox.  After 15 months of not being able to rehearse or perform in person we are really looking forward to this.  We will be performing a programme of short pieces, to show the breadth of our repertoire, which apart from the great choral works includes sacred music, opera choruses, and songs from the musicals.  For more information about Hailsham Choral, see our website: www.hailshamchoral.org.  We are at present recruiting new members, so if you are interested do get in touch! (hcsjoin@hailshamchoral.org).” 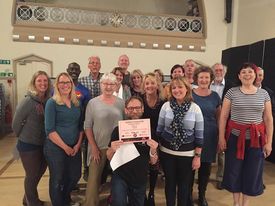 Warbleton Warblers
Bourne to Sing and Warbleton Warblers are both Community choirs open to all established in 2012 and lead by Kerry Evenden. Based in Eastbourne and Warbleton, the primary focus is to create a safe and fun atmosphere for people to develop their singing skills. We perform a mixture of Pop, rock, folk, soul and gospel tunes. Members are also encouraged to make song suggestions!
Marcus Plant Marcus studied a Music at Kingston University and at post-graduate level in Advanced Performance at The Royal Academy of Music in London. He has performed at venues including Royal Festival Hall, St Martins in the Fields in London, The Winspear Centre in Canada, The Lincoln Centre and Carnegie Hall in New York. As well as on BBC TV and Radio 3 including a world premier for HRH Queen Elizabeth II. Marcus continues to perform throughout the year, mixing it with a busy teaching schedule, inspiring the next generation of young brass musicians. Marcus also conducts numerous bands and ensembles such as the local Eastbourne Silver Band.